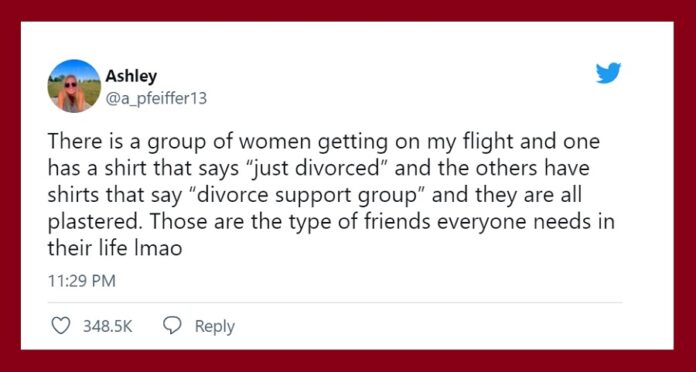 Society has been pitting women against each other for centuries by stereotyping that women are spiteful, jealous of each other, and can’t possibly co-exist together.
Well, the reality is that none of that bs is true. In fact, the sexist narrative only makes women support each other even more, be it something as simple as complimenting each other’s looks, or coming to a stranger’s rescue when being cornered by creepy men.

We all know that women had each other’s back, but it’s truly empowering when you see it with your own eyes. So, today we’ll present you with some of the most heartwarming stories of women raising each other up – and you can vote for your favorites in the comments.

There is a group of women getting on my flight and one has a shirt that says “just divorced” and the others have shirts that say “divorce support group” and they are all plastered. Those are the type of friends everyone needs in their life lmao

If a girls asks me for a tampon and I don’t have one for her, best believe we bouta search the entire vicinity together to find her a tampon

So my boyfriend has a identical twin brother and someone thought my boyfriend was cheating on me but it was really his brother and his girlfriend 😂😂😂 thanks for having my back though girl ✊️ pic.twitter.com/kp3d4D6dmZ

Why Kamala Harris waited for Warren & Klobuchar to exit the race before endorsing Biden.

“I had two women colleagues in the race & I did not feel right putting my thumb on the scale [that] in any way would harm their candidacy.” #GirlsSupportingGirls https://t.co/GSuQYum3O4

the team helped me out with good lighting to take a nice pic of me eating pizza pic.twitter.com/dZdYa11Yep

I asked a girl where did she cut her hair and she took an appointment for me and a discount at that hairdresser…girls support all the way!

My best friend stayed up and packed my things for my trip bc I was too tired last night and fell asleep. I woke up this morning to this 💕💕💕 pic.twitter.com/XzAIK9etY2

i had no money so my friends bought me food and clothes, i love my friends 💛 @skylabain @hahn_solo25 pic.twitter.com/IeDHAyVXKr