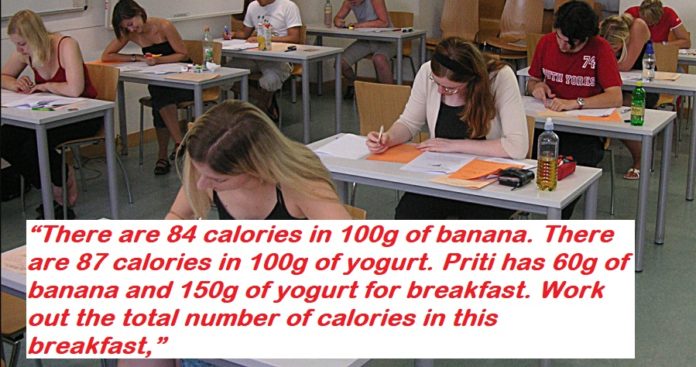 A question that was included in a GCSE exam and is required for all 16-year-olds in the U.K. to take has sparked outrage, and for the right reasons.
As it turns out, students who are sitting for a summer math exam in the U.K. were given a question in which they were asked to calculate the total number of calories in a woman’s breakfast. This is what the question read:

The first reason this is not OK is that calculating the caloric value of small amounts of food like this is a common behavior for people who struggle with eating disorders, and reading the question could trigger anyone who’s ever had an ED.

To make things worse, the question was put in front of 16-year-olds, and knowing that anorexia is the third most common chronic disease for adolescents, and knowing that 95 percent of the people who struggle with eating disorders are aged from 12 to 25, this is remarkably tone-deaf.

If you calculate the breakfast, it adds up to 180.9 calories. The question states that this is a woman’s breakfast, and it all adds up to less than 200 calories – which is clearly not enough for breakfast.
Sending the message that 180 calories are a healthy amount of food for a grown woman to eat in the morning is just wrong, and this test is sending that message to thousands of growing teenagers.

There were numerous complaints about the question, so the school officials investigated it, but ultimately decided that the question is “valid”.