Dogs are one of the most magnificent creatures on our planet. Not only that they’re adorable and smart, but they support us emotionally, they guide us, and they’re most definitely human’s best friend. However, it seems like it’s not only humans that they help, and if Tao, the 12-year-old golden retriever could talk, he would tell us that there’s no substitute for what dogs provide us.
Tao had his eyes surgically removed due to glaucoma some time ago, and he would have been unable to move around if it wasn’t for Oko, his trusty helper.

Melanie Jackson is Tao’s loving owner and she recounted how it all went. Last year, Tao was diagnosed with glaucoma, and he had his eyes removed. Despite his blindness, though, he recovered rather quickly, and she was a happy dog once again.

However, he struggled while moving around, and he needed someone to play with him and keep him company.

Melanie decided to look for a dog that could be Tao’s pal, and thankfully, she found Oko. Although Oko was just 8-weeks old, he and Tao clicked almost immediately, and now they’re inseparable!

Like Tao, Oko is also a golden retriever, and he has become a guide dog to another dog! Tao now follows Oko around when they’re walking, and they even sleep together.

Oko has gotten used to his new role, and the owner started off an Instagram account in which she shares Tao and Oko’s stories. School Publishes Photo Without Teen With Down Syndrome, Even Though She Was In Her Yearbook Photo 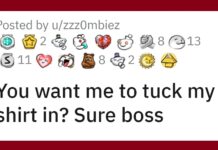 Boss Tells 8-Month Pregnant Woman To Tuck In Her Shirt, She Maliciously Complies