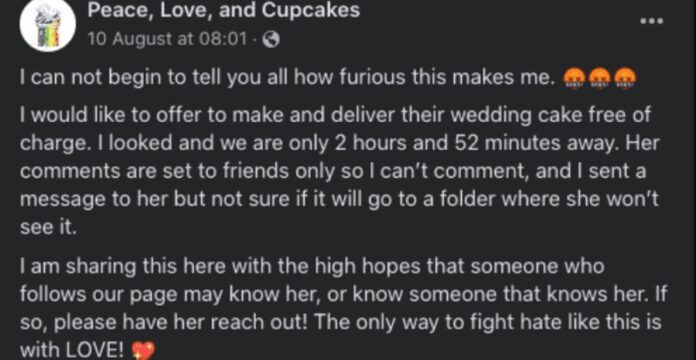 Desirie White and Jess Dowd are a lesbian couple from Berwick, Pennsylvania, who were all set to get married and have their dream wedding, but they encountered one major problem. Namely, the baker that was supposed to bake the cake for their big day canceled on them on discriminatory grounds.
The two were so frustrated by the turn of events that they decided to call the baker out on social media – and it was then when Rebecca Riley, the owner of bakery Peace, Love, and Cupcakes decided to step in. Riley, from Syracuse, was very upset by the situation, so she offered to help them out and ‘save the day’.

White and Dowd posted the email that their original baker sent them, and it read:
“I will not be able to do this for you. My refusal to make your cake is based on my fidelity to the God of Scripture.”

How disappointing. The post gained a lot of attention on social media, and when Riley saw it, she realized that the couple is located just three hours away from Syracuse. So, she decided to bake the cake and deliver it to their wedding location. She shared it on the bakery’s Facebook page and asked people to connect her with either White or Dowd. She posted:

“I cannot begin to tell you all how furious this makes me. The only way to fight this hate is with LOVE!”

The baker finally got in touch with White, and they discussed the details of the perfect wedding cake. They settled on a vegan lemon cake, and Riley pledged to bake the cake for free for the couple. She noted that she wanted to make a stand against hate, and, as she put it: The point is to combat that hate with a grand gesture of love.