Home Parenting During The Pandemic ER Doctor Loses Custody Of Her Daughter, And Fears...

Health workers are the soldiers of our time. They are at the frontlines of the global pandemic that has struck the whole world, and they leave their families at home every day in order to go out and protect us.
Dr. Theresa Greene is an emergency room doctor in Miami, Florida, and even though she, like most medical professionals, see this as her duty and service, she has begun to bear the heavy brunt of her job.
She’s not sure when she will be able to see her four-year-old daughter again, simply because she’s in the frontlines against the Coronavirus pandemic.

Her daughter currently lives with Theresa’s ex-husband Eric Greene, and he was handed temporary sole custody after it was argued in court that Dr. Greene was exposing her daughter to the virus. The mom told PEOPLE Magazine that she now fears that she’s going to think that she abandoned her and that’s really, really hard for her.
The reality is that it has been difficult for her daughter too, who can’t see her mother anytime soon.

To add to that, he argued that Dr. Greene is a skilled health professional, and she takes all the necessary precautions to ensure that she isn’t carrying the virus or is able to transfer it to others.
She stated that she takes off her clothes outside when she comes home, she washes everything on high, and immediately gets in the shower.
According to her, for the court to grant full custody to her ex-husband during this crisis is rather heartless and heavy-handed.

The couple has been divorced for almost two years now, and both parents have shared joint custody of their daughter so far. However, the court has acted in a very discriminatory basis in her situation, and she argued that most of her coworkers have children that they go home to, and no one is calling CPS on them and saying that “they’re exposing their children to the illness”.

Her husband’s attorney said that following Mr. Greene’s request, it has been ordered by the Court for Dr. Greene to be provided for future make-up timesharing for each day missed during this challenging time, and daily video communications with the child now.

Dr. Greene, though, just wants to have her child back in her arms, and be able to say that she loves her more than anything, and that’s why she’s fighting this battle. 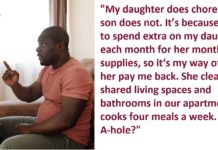