Home Parenting Girl With “Butterfly” Birthmark Called A “Monster”, But Her Mom Hits Back Carol Fenner and her partner Thiago Tavares were first shocked when their now four-month-old daughter Luna Fenner was born with a distinctive mark on her face.
The mark is known as Giant Congenital Melanocytic Nevus (GCMN), and only one in 20,000 newborns worldwide are affected by it.

An MRI scan showed, however, that the parents shouldn’t be concerned about it.
They decided to set up an Instagram page shortly after Luna was born to help raise awareness of the condition, and the page already has over 100k followers.

Many people sweetly dubbed the little girl a “little butterfly” because of the shape of her birthmark. However, there were also some cruel trolls who wrote that “the baby is a monster and it shouldn’t live”, and Carol has a message for them. The mom has been overwhelmed by the positive response her daughter has received on the Internet. People from all over the world have been sending them photos with their faces painted like Luna’s.

However, they also got some horrible comments as well, and the worst one they had was from a man who asked if “it wouldn’t be better to take her life than live with a monster like Luna”.

The mom understands that people might be shocked when they see her, but she wants them to think about their reaction. Naturally, Carol had concerns for Luna’s well-being when she was born, as the doctor told them just 2 minutes after she was born that it’s cancer.

The condition is so rare that the doctors didn’t know what to do. The mother frantically searched online for information about what the mark could mean, and she was frightened by the word “cancer”.

They had a 4D scan, but she says that it’s impossible to know before babies are born whether they will have this mark.

Luna had an MRI scan on her neck, face, and brain when she was just six days old, and the results showed that the mark was not cancerous.

A visiting dermatologist diagnosed her with a CMN, and the parents decided to visit their first plastic surgeon. After they weighed up both the risk of the CMN and their fears that Luna may be targeted by nasty trolls when she gets older, they decided to find a surgeon that would remove the mark while she’s young.

Carol says that they receive hundreds of messages per day, and about 80% of them are from people who have a similar condition, saying that they were targetted by trolls all their lives, and she doesn’t want her daughter to go through that.

The family managed to find a medic in New York keen to take on the case after searching across the US, but the cost could reach over $500,000 because Luna would need five or six surgeries over the next three years.
Their loved ones have set up a GoFundMe page in order to help raise cash, and it has already gathered more than $20,000. The mother is determined to raise awareness about CMN via their Instagram page, and she hopes that Luna will take comfort from all the positive messages when she is older.

She wants to show her daughter that a lot of people were sending her good vibes and found her beautiful. Luna will always be beautiful, and the parents tell her that all the time. 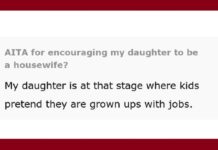