Home Activism Men Share How They’d Put Women In Uncomfortable Situations In The Past... 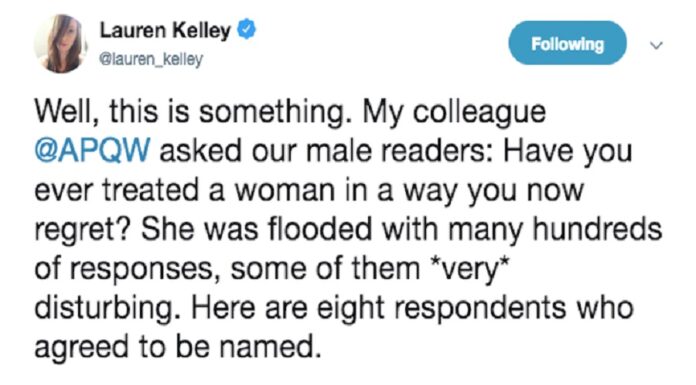 The #MeToo movement shined a light on the conversation of assault against women, and it paved the way for the voices of survivors to be heard.

Tarana Burke, the founder of the movement, intended for it to be a way to spread the message for survivors and let them know that they’re heard and understood.
Thankfully, some predators were held accountable for their wrongdoings, but the system and culture of harassment didn’t seem to change much, especially when it comes to teaching men about consent and its importance.

Well, this is something. My colleague @APQW asked our male readers: Have you ever treated a woman in a way you now regret? She was flooded with many hundreds of responses, some of them *very* disturbing. Here are eight respondents who agreed to be named. https://t.co/LgxT6SANvY

Back in 2018, The New York Times decided to invite male readers to share their stories when they’ve made young women uncomfortable, and they now regret their actions. More than 750 men responded, and while most of them have been anonymous, some of them included confessions to heinous crimes.

The piece was authored by Alicia P.Q. Wittmeyer of The New York Times, and she decided to only include the account of men who agreed to be identified.
Only eight confessions were recounted out of all the stories, and you can read them all in full here.

For example, one man confessed to the time when he was 15 and he and his friends threatened a girl to allow them to fondle her exposed breasts. He said that he regrets his actions now, 5 decades later.

“As a father of two millennial daughters and one millennial son, I would be horrified today if anything close to that ever occurred. This is the first time I have ever spoken about it.” Gene Biringer also confessed to taking advantage of the chaos of a friendly rumble and the darkness of the evening it happened on to grope a girl he was attracted to and intimidated by. “For my own part, I knew that what I was doing was wrong, but I didn’t realize how wrong it was until I saw the young woman’s reaction, and I’ve regretted it ever since.”

Another reader, Lee Montgomery, told The New York Times that he had coerced a shy girl into a car with his friend and they made a lot of uncomfortable suggestive comments to her. He now said that he regretted it so much that he dropped out of high school.

“My point is that I believe it is entirely possible for people to mature and be good citizens and to leave behind youthful bad behavior. But to do so requires admitting to wrongdoing. If I were to see her today, I would apologize sincerely with no excuses.” – he added.

This is how readers reacted to The New York Times’ piece:

“My reaction reading is a physical one. I literally feel sick to my stomach… I was wondering if my sexual assault would be one of the ones recounted here,” writes Ginni in a comment on “Eight Stories of Men’s Regret.”https://t.co/fRMRvAIfjz pic.twitter.com/ROc4eSG3tr

I couldn’t read all of it. I was getting too upset. Their regret is useless if they never expressed it to their victims. All assault has a core of cowardice.