Home Women ‘No Men Allowed’ Club Night Is Opening In The UK, And Women...

Lick Events is a company that will be taking over the Ritz nightclub in Manchester on May 7 to open a ‘no men allowed’ club night as a part of a nationwide tour across the UK.

The company states that the Lick nights are ‘for women, by women’ and have a strict ‘no men allowed’ policy. The aim is to provide a safe space for women and trans people to party safely, and has been running for some time now.

The first Lick club was opened in London’s Vauxhall district in 2019, and now they’re expanding across the UK. Besides Manchester, the tour will visit Birmingham and Brighton, and more locations are currently being planned. The company claims that the line up for the event in Manchester will see the likes of popular DJs such as Monique B, Janelle Wynter, and Miller Black.

While another added: “I am a middle aged het man and love this. Women partying with women will be a fun atmosphere.”

After the promo video went viral on TikTok, many users were on board with the idea. One user commented that this would work because men go in night clubs ‘on the pull’, while girls go to have fun.

Some even hoped that the event would go global: “Wow we should have these in the Netherlands… I would love a night out without being harassed.” 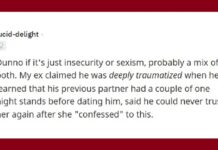