Home Women Women Share How Old They Were When Men Started Making Them Feel... 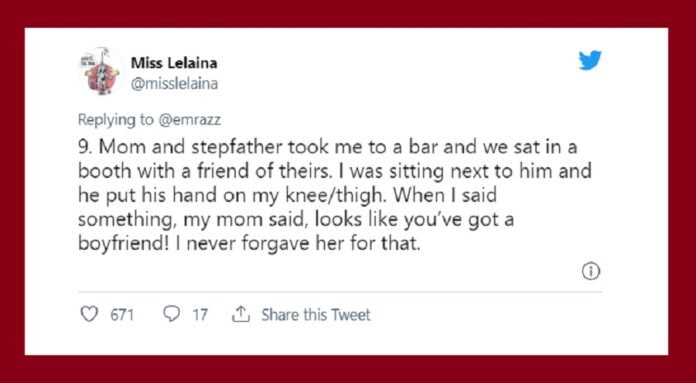 The feeling of being completely at ease and safe in your surrounding is a luxury that about half of the world’s population can’t have. Why? Because of the actions of the other half!

The popular Twitter user ‘feminist next door’ recently decided to put the spotlight on a serious issue that often goes unnoticed. Namely, they asked women how old they were when men started making them feel uncomfortable or unsafe in their own bodies. Thousands of women responded in the comments with their own heartbreaking stories, and we’re still wondering why this has been allowed to continue to this day?

Check out some of the responses for yourself below:

I was 11 and a man grabbed and hugged me when I was walking home from the tram stop. The police laughed at my dad when he reported it.

Pretty much for as long as I can remember, friends of my dad would talk about how they were going to take me away and marry me. Not just one man. It was always creepy. It made me uncomfortable every single time. I would cower behind my mother and they would call it cute.

You didn’t mention sex so here goes. 5 when I became frightened of boys. 6 I learned about creeps. There were some dangerous men to kids in my area. Me and my friend Caroline ran away from them. As a teen I was stalked but I can’t remember my age.

In preschool there was a boy who always tried to touch all of the girls and look up our skirts. Teachers told him to stop but “boys will be boys” I decided to become his girlfriend so he’d stop doing it to everyone. He did and I punched him everytime he tried to even hold my hand

Young – I remember being 5/6 and being told proper young girls don’t “sit that way”, “talk that way”, “boys don’t like girls who are bossy”. It got worse as I got older. Pretty sure it took until my 40s to truly love me the way I am! I’m 51 now!

5. A boy chased me around the playground trying to kiss me. I told a teacher and she told me that just meant he liked me. I remember being so angry, even at 5, that someone would think it was fine for this boy to do whatever he wanted and what I wanted didn’t matter.

11. Male babysitter – came into my bedroom after bedtime.

Never wore my favourite pajamas ever again. They had green frogs on them.

9. Mom and stepfather took me to a bar and we sat in a booth with a friend of theirs. I was sitting next to him and he put his hand on my knee/thigh. When I said something, my mom said, looks like you’ve got a boyfriend! I never forgave her for that.