Home Women Women Share The Things They Would Do If All Men Had a... 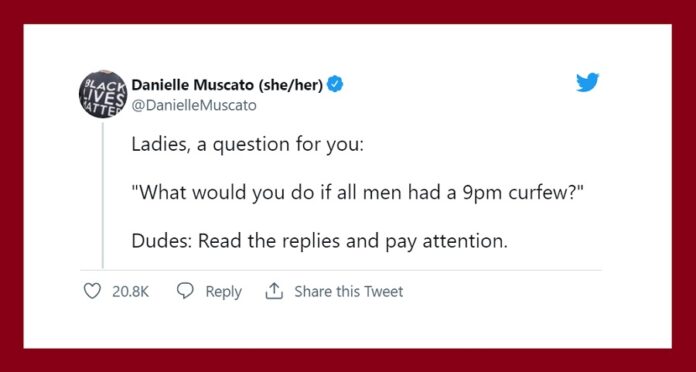 Even though we’ve come a long way towards equality, we still live in a patriarchal world. In many places around the world, women still can’t even walk at night without being afraid.

A recent poll conducted by YouGov found that 86 percent of women aged between 18 and 24 have found themself in bad situations.

It’s simple – women don’t feel safe going out at night alone, and it’s time to change that.
Although some people still accuse women of dressing a certain way or acting a certain way, we all know who is to blame – men. That’s why Danielle Muscato, the host of the #Resist Podcast, asked women what would they do if men had a curfew.

Hundreds of women responded to the tweet, and the replies were both eye-opening and heartbreaking. Most women asked for simple things, like being able to walk at night without fear, being able to go with their headphones on while not having to hold their keys between their fingers, etc.

Check out some of the responses below, and feel free to share what would you do if all men had a 9pm curfew?

Ladies, a question for you:

“What would you do if all men had a 9pm curfew?”

Honestly I would just walk around, by myself, listening to music. When I get to my car at night I wouldn’t lock it as soon as I close the door.

I would walk to my car with my keys in my purse and not spread between my fingers as a potential weapon. I would listen to music on headphones, as I strolled and admired the lit street lamps in Central Park.

Go out to bars by myself, walk with both headphones in my ears without my keys in between my fingers inmy hand.

I could actually go for a walk at night. Maybe sit on the beach at night & listen to the waves while watching the stars in the sky. Maybe go out for drinks with my friends without worrying about being hit on by some creepy guy. Go outside without a bra on for a change.

I’d do all my grocery shopping at 9:01pm so I wouldn’t be followed to my car, not told to smile in the store, not told (this one is so real it hurts), “You don’t need to be eating all that, it’s not good for you!” because I bought my kids some popsicles.

Go camping solo–and then if I heard something approaching my tent at night I could worry that it IS a bear rather than worrying that it ISN’T a bear.

Me too. Would be so nice to not have to run in the heat of the day.

Having drinks with girlfriends, being able to leave an establishment without fear of being followed by a man who felt I “encouraged him” by being in the same place at the same time.