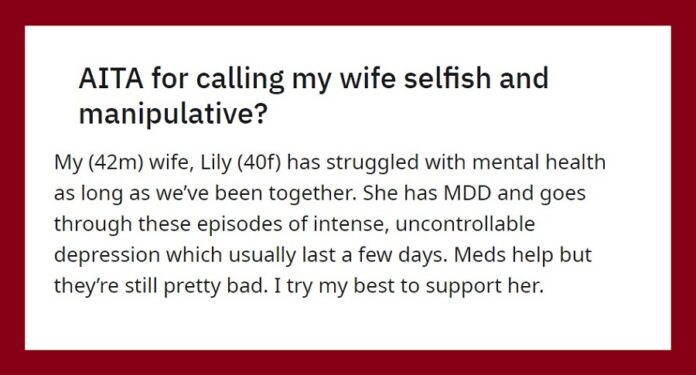 We do realize that life is hard as it is, but things tend to get worse if you have a significant other who is depressed – especially if there are kids involved. However, whether you should work on stopping your depressed partner from revealing ‘too much’ to the kids is a tough question. In most cases transparency is a good thing, but sometimes oversharing some information can put others in harms way for something that’s not their fault.

Case in point, one man decided to take it to the popular Am I The A-hole subreddit and ask if he was in the wrong for calling his wife selfish and manipulative.

In the post, the 42-year-old man shared that his 40-year-old wife has struggled with mental health as long as they’ve been together. She has MDD and goes through episodes of intense and uncontrollable depression that usually lasts for a few days. She does take meds, but sometimes it gets pretty bad, and the husband wrote that he tries his best to support her.

The couple shares two kids together, aged 14 and 13, and when their mom has an episode, the husband usually takes them out or keeps them occupied and away from her. However, during the most recent episode, the husband had to go do errands, so told the kids to leave their mom alone because she was feeling sick.

When he got home, he found the kids and their mom sitting together in the living room – and both of them looked upset. He asked his wife what happened, and she said that she told them the truth – including the reason why she had scars. The husband was horrified, and he told her that she was selfish and manipulative for her to putting that kind of pressure on their kids.

He shared that she hasn’t talked to him since, and it seems like the whole thing made her episode worse, so now the husband was wondering if he was in the wrong to say that. Check out the story for yourself below, and see how fellow Redditors responded. 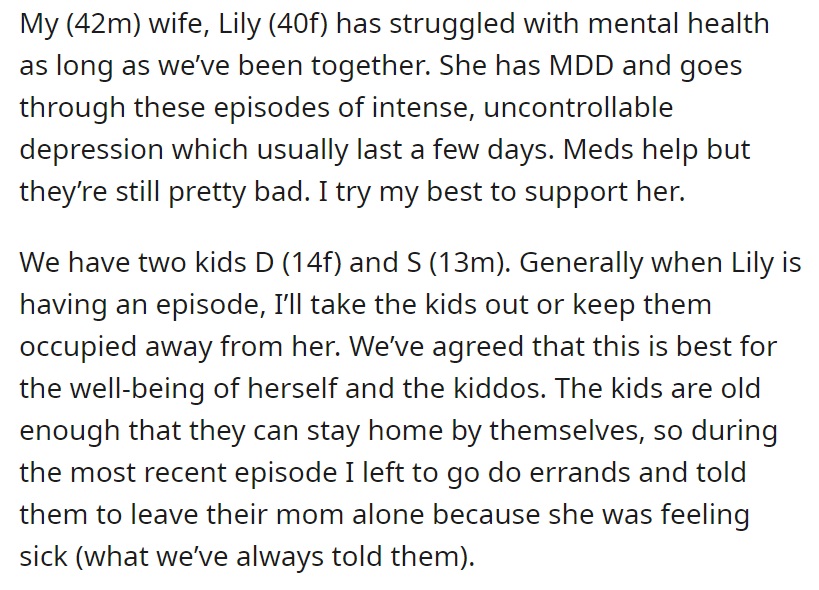 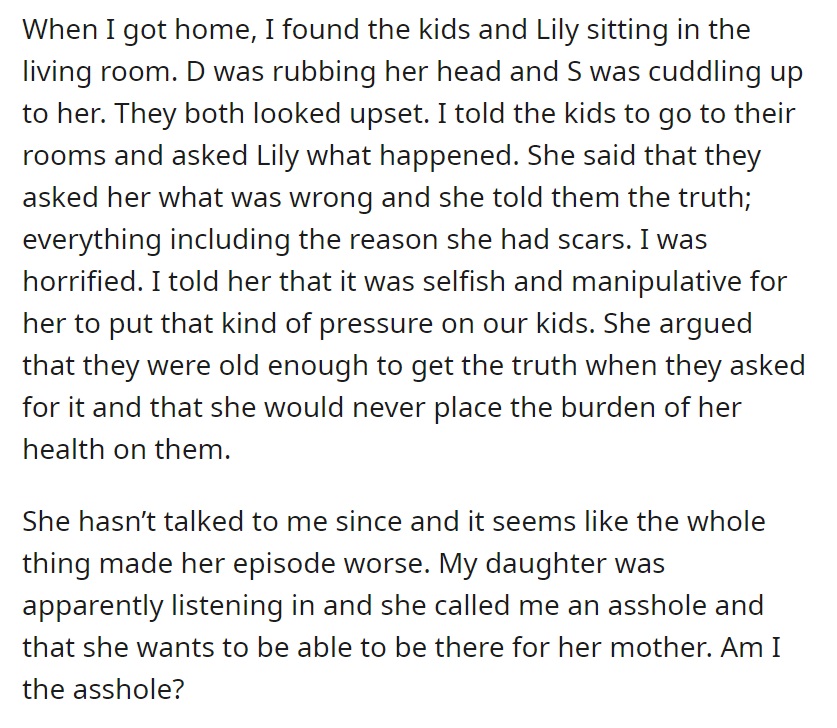 Most people agreed that the husband is, indeed, the a-hole here. They believe that the kids are old enough to know the truth, and knowing the truth is always the best solution.

Check out some of the most popular responses below, and feel free to share your own thoughts on the matter in the comments. 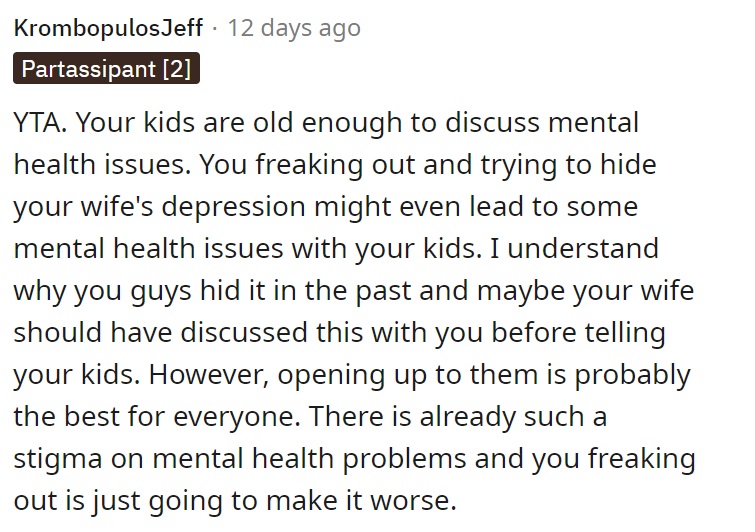 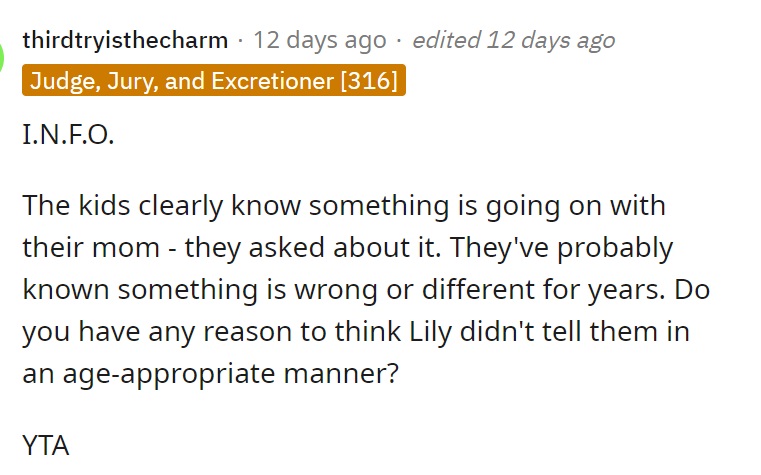 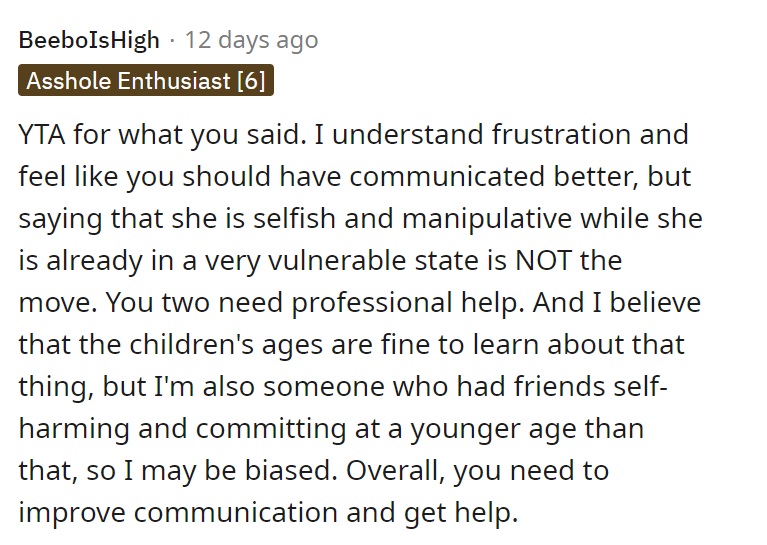 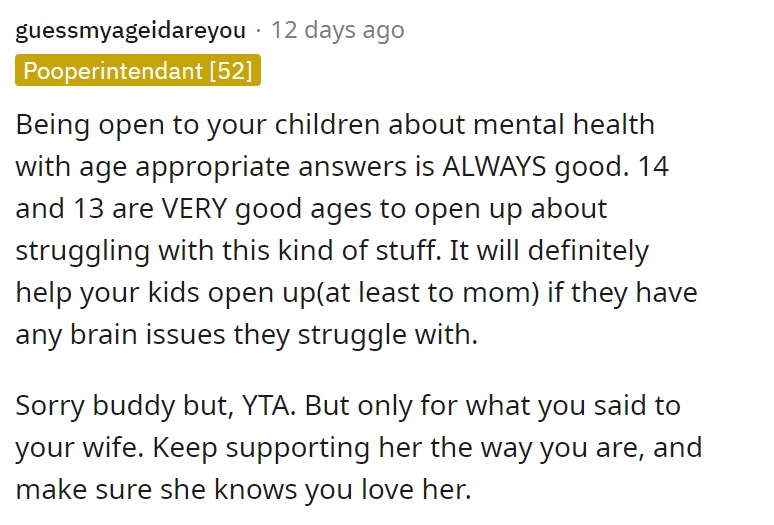